Amanda loved to laugh and play, with homework falling near the bottom of the list of things to do. She enjoyed horseback riding, talking on the phone or chatting on MSN. She was a healthy child, battling the usually amounts of colds and flu, and getting chicken pox at the age of 5, which kept her out of school for a week. We were not prepared for her final few years of life. Amanda was always active. In the summer months, she would play on a recreational soccer team. During the other months of the year, she would participate on school team sports; taking gymnastics, dance or skating lessons. At the age of twelve, she had the wonderful experience of witnessing the birth of her sister, Vanessa. Amanda took so much pride in being a big sister. 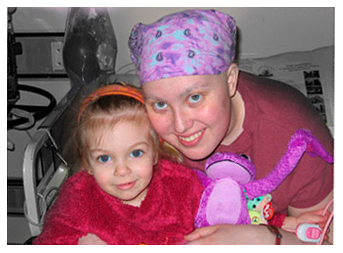 Soon after Amanda turned thirteen, she started to suffer from back pains. The initial x-ray and ultra sound were clear. The back pain persisted and a few months later, a growth was discovered on her spine and her final journey began. She was rushed to The Hospital for Sick Children on April 16th, 2003 and by midnight was in the surgery to remove a portion of the growth that caused the pressure on her spine. A biopsy confirmed cancer, Ewing’s sarcoma, a very aggressive cancer that usually develops in the teenage years. Damage was done to Amanda’s spine, which paralyzed her legs. After the initial shock wore off, and a lot of tears shed, we decided as a family that we would not let it stop us from enjoying life. 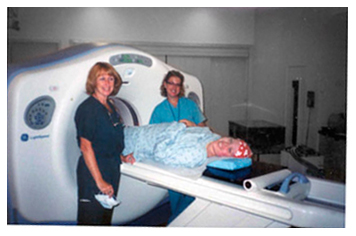 Amanda would be bounced back and forth between The Hospital for Sick Children for chemo treatments and Bloorview Kids Rehab struggling to regain the use of her legs. During that time, laughter was our best medicine. Whenever possible, tense situations were erased with jokes, silly comments, or a slapstick routine. This would help take our minds off the current situation. In May 2003, Amanda was given permission to attend her grade 8 confirmation. This was the first time that she spent an evening outside the hospital or rehabilitation center in over a month. All her schoolmates welcomed her with open arms. Amanda was a little nervous about going. This would be the first time she ventured out with her wig and wheelchair, but her schoolmates were overjoyed that she was able to attend and she had a great time. 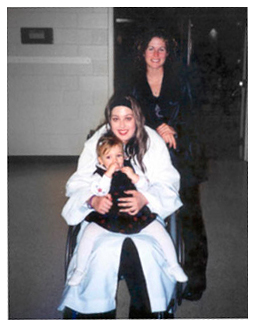